With 2022 well underway, Apple’s “Geniuses” are currently working on the next instalment of their famous iMac (Pro). I say (Pro) because this version of iMac could see the return of not only the 27” screen but the highly sought after iMac Pro. Rumoured to be releasing in the first half of 2022, we really don’t have too long to wait.

In the spirit of a true Apple product hype train, we are going to update you on all of the current rumours surrounding the new iMac 2022. 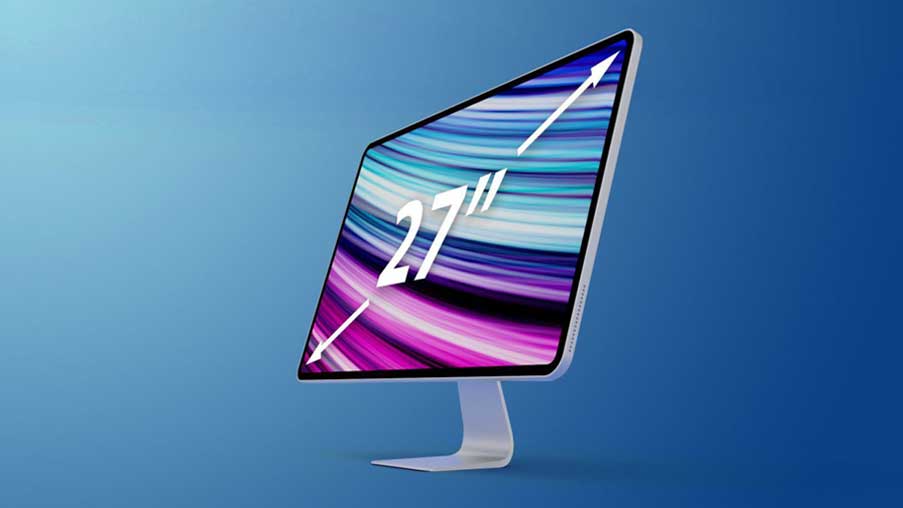 It makes sense that the new iMac will follow in the footsteps of the 24” M1 iMac and the Apple Pro Display XDR in terms of design. Well, this was “confirmed” by Apple leaker Dylandkt, who according to appletrack.com has a 77.5% accuracy rate. If it is indeed similar in design, we can expect a slimmer body than the previous intel-based models with a wider range of colour options.

Although it seems likely the new iMac will come with a selection of colours, it would be nice if they went for a darker colour scheme much like they did previously with the iMac Pro in 2017. If we are however going to see a repeat of the same colourways offered on the 24” M1 iMac we can expect to see the following colours: blue, green, red, silver, orange, yellow and purple that blend from dark on the back to a lighter pastel finish on the front.

Dylandkt has leaked that the bezel around the edge of the screen is going to be black rather than white which could hint towards a darker colourway much like I am hoping!

A preview of the report from Digitimes on 21/1 stated suppliers had kicked off shipments for the 27-inch iMac that will feature a mini-LED display. However, an article from the outlet published 22/1 now states:

“Suppliers have kicked off their shipments in small volume for the new 27-inch iMac set for launch in 2022, but the device will not come with a miniLED display as previously speculated, according to industry sources.

The sources pointed out that speculation about the next-generation 27-inch iMac coming with a miniLED display has been circulating in the market ever since the 24-inch iMac received a major upgrade in the CPU platform earlier this year, but the shipments of the 27-inch device in December showed that it is still equipped with a traditional LCD display.”

Analyst Ross Young does however suggest this is likely incorrect so we’ll have to just wait and see for this one.

Where the 24” has just two Thunderbolt/USB 4 ports on the entry-level and an additional two USB 3 ports on the other models, Apple is likely to incorporate the same set of convenient ports that the MacBook Pro 14” and 16” have which includes: USB-C/Thunderbolt ports, an SD card slot, and an HDMI port. Incorporating these extra ports does support the idea of an iMac Pro release, geared more towards professionals like graphic designers or video editors.

Another thing that is likely to change – as on the 24” iMac, it seems likely that the ethernet slot will move to the power brick.

With the 27” iMac, Mac Mini and Mac Pro machines being the only remaining intel-based chip systems, it is highly likely we will see the 27” iMac eliminated from this list with the upcoming release. The recent processor rumours are that the new iMac 27” will feature the same M1 pro and M1 Max chips seen previously in the MacBook Pro 14” and 16”. This does seem fairly obvious so we can expect this one to come to fruition.

There is a 10-core CPU (two efficiency and eight performance cores) option for both the M1 Pro and M1 Max (along with a cheaper 8-core version for the M1 Pro) but Dylandkt suggests there will also be a 12-core version of the M1 Max chip for the higher end version of the iMac, the iMac Pro. “Confirmed” in a tweet by Dylan:

“I have received confirmation that there will be an additional configuration for the upcoming iMac Pro beyond M1 Max. A 12 Core CPU configuration was tied to a snippet of code referencing the iMac. The internal naming candidate is iMac Pro for a reason. It is targeted towards pros”

One way that Apple may be able to furnish the iMac with even more processor cores would be if it offered dual chips – two M1 Pro or two M1 Max inside the larger iMac. This could mean that there could be a 20-core CPU inside the new machine. However, this option would most likely be reserved for the Mac Pro when Apple finally decides to sever its ties with Intel completely. 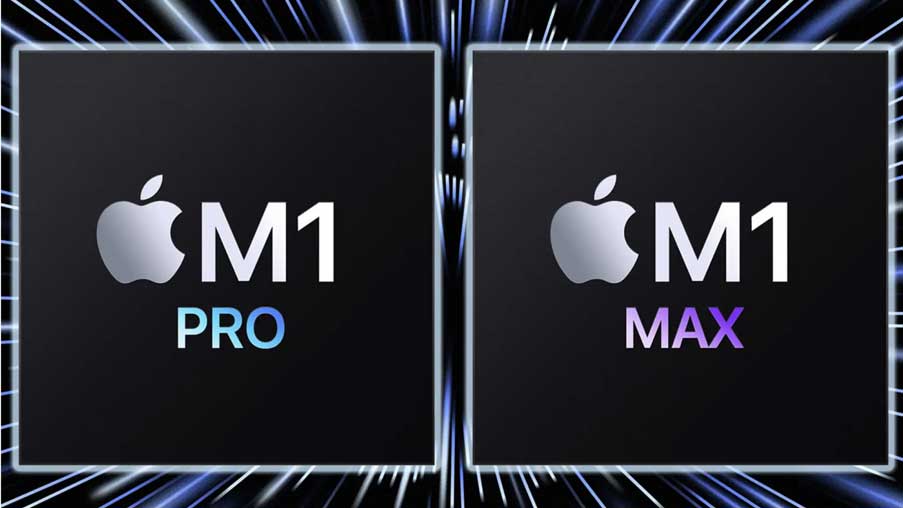 The original M1 chip seen on the MacBook Pro 13” offered an eight core GPU. While the graphics processing power has been impressive on the M1 as far as integrated graphics go, it’s not quite up to the same standards of a machine with a high-end external GPU. The M1 pro however does offer 14-core and 16-core GPU options which Apple boast are up to 2x faster than the original M1 chip and the M1 Max comes with a 32-core GPU which is up to 4x faster than the original M1. If this isn’t deemed enough by Apple for their professional users, we could see a similar setup to the processor discussed previously in the sense of a dual chip.

RAM is quite possibly the biggest limitation of the M1 chips so far, with all of the M1 models only being able to support configurations of 8GB or 16GB RAM. Although Apple claims this is their super-fast M1 RAM which is way more efficient than normal RAM, there’s just no chance 16GB or even 32GB of RAM is going to cut it for those looking for a high-end machine.

In his tweet in October 2021 Dylan suggests that there will be 16GB RAM as standard in the new iMac. If the M1 Pro and M1 Max are included then that suggests that the new iMac will be able to support 64GB RAM, which is less than the 128GB RAM currently supported though.

If Apple were to adopt the dual chip setup mentioned previously, this would in theory allow the machine to support up to 128GB RAM with a minimum of 64GB unified memory available to access versus the 16GB of HBM2 discrete memory with the Vega 64 that featured in the iMac Pro.

Also in his tweet from October, Dylan claimed the new iMac will come with a 512GB SSD as standard much like the 16” MacBook Pro. This would also suggest that Apple will offer a 1TB version and a ‘build to order’ model with an 8TB SSD offering.

I can however see them offering more options with hard drive size, maybe 2TB SSD and a 4TB SSD version.

The release of the iMac 24” in May 2021 hosted a range of new features including; colour-matched keyboards with Touch ID, improved audio features – including a high-fidelity six-speaker system with force-cancelling woofers, and an improved 1080p FaceTime HD camera with M1 image signal processor. 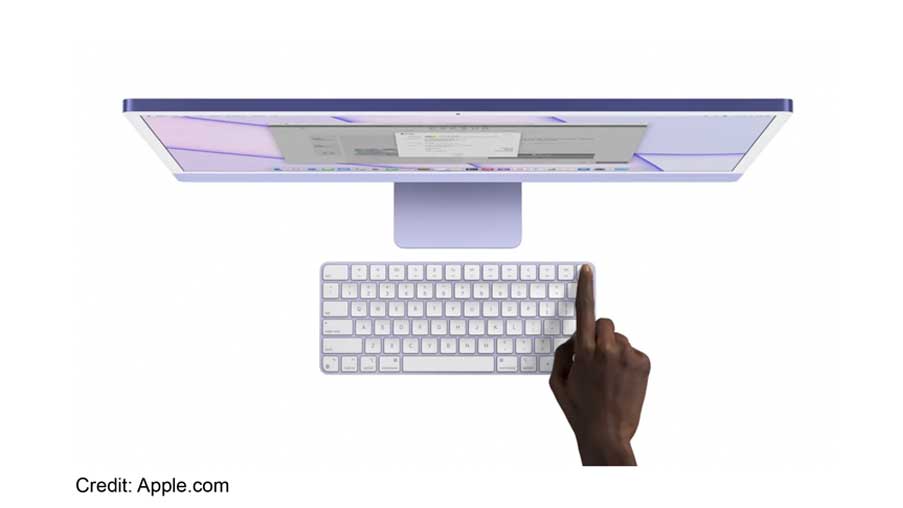 So, what new features might we see with the iMac 27” release?

It’s been a long standing rumour that Face ID seen on the iPhones will eventually come to Apple’s range of Macs. This was expected to arrive on the new 14” and 16” MacBook Pro but never came to fruition. With the ever improving FaceTime HD camera, could this be the time for Face ID to make an appearance on an iMac?

The 27-inch iMac comes with standard glass on the front of the display, but for $300, Apple offers a nano-texture glass that provides a matte-like finish and does a good job of cutting down glare. Apple will probably continue to offer this with the new larger iMac. As you can see below, it dramatically cuts down on the gloss and glare. 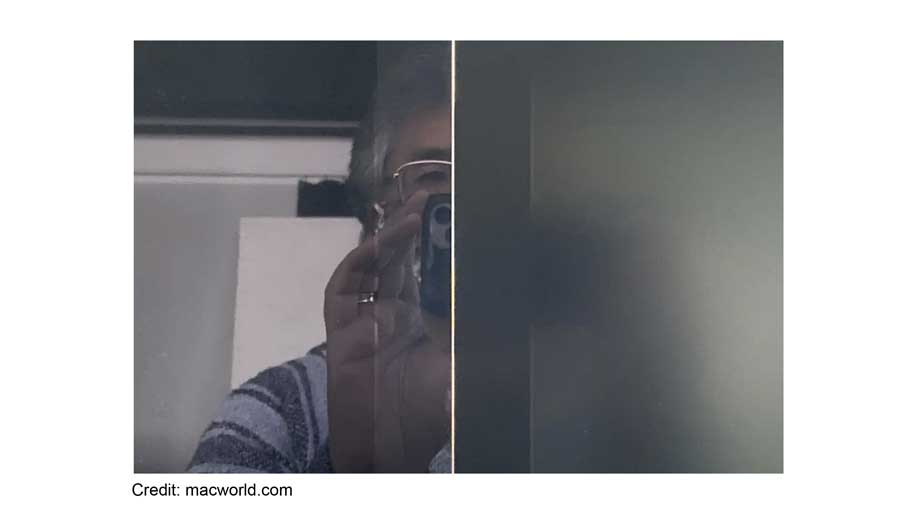 The current word on the street is that Apple is gearing up for a spring 2022 launch at their spring event but with whispers of production issues, we could see this being pushed back to autumn 2022.

As for the price, the base model which is rumoured to start at 512GB SSD and 16GB RAM we’re looking at $2,000+ according to dylandkt. This isn’t unlikely based on the increase in price Apple seems to impose every year with their products.